Tuuletar has been invited to perform in Japan in December. The prestigious Plankton -organization has set 6 concerts for Tuuletar during Christmas 2016. Tuuletar will be traveling to Tokyo the 20th of December for a press conference and will perform in Roppongi Hills -venue the 23th, 24th and 25th of December. 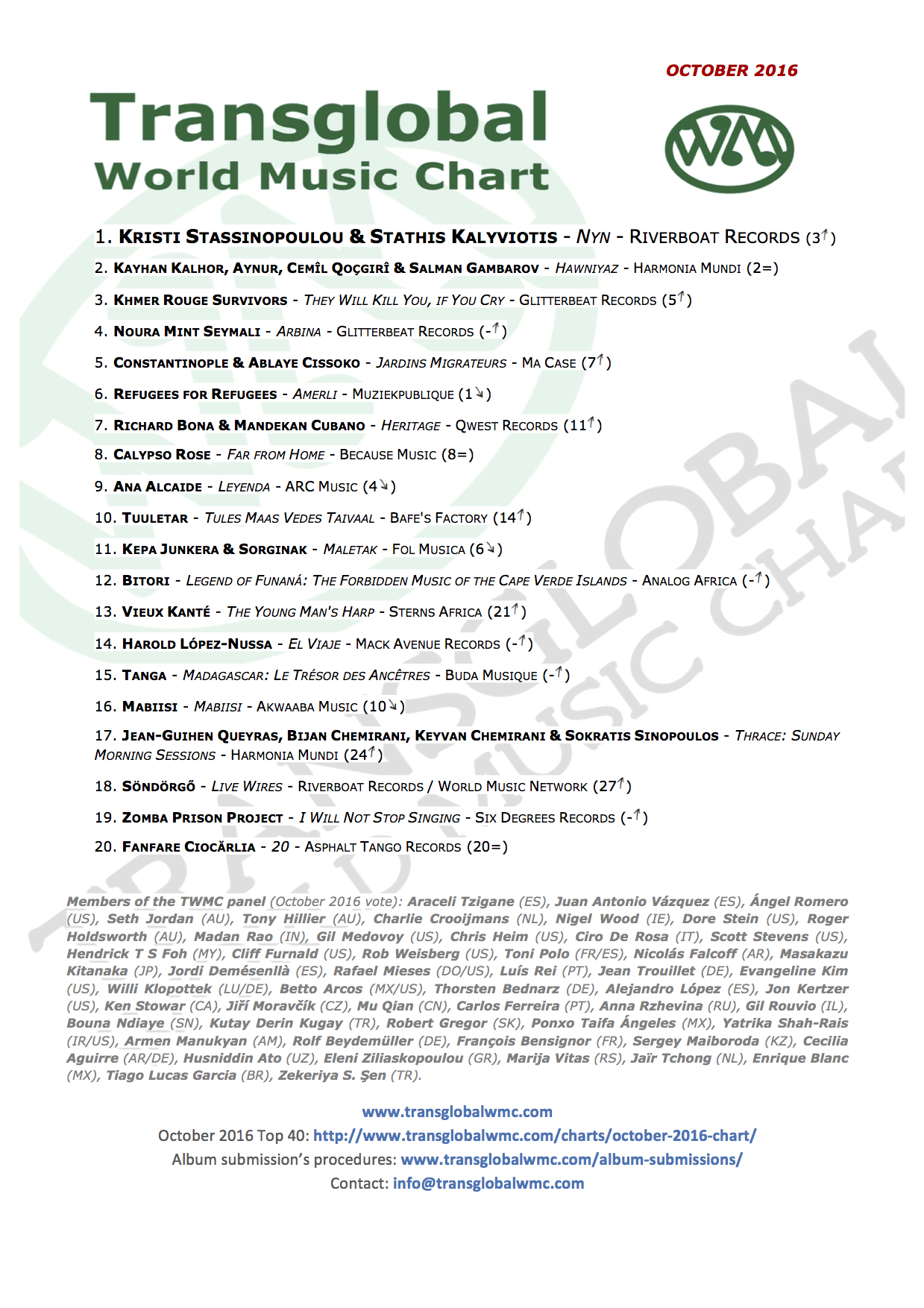 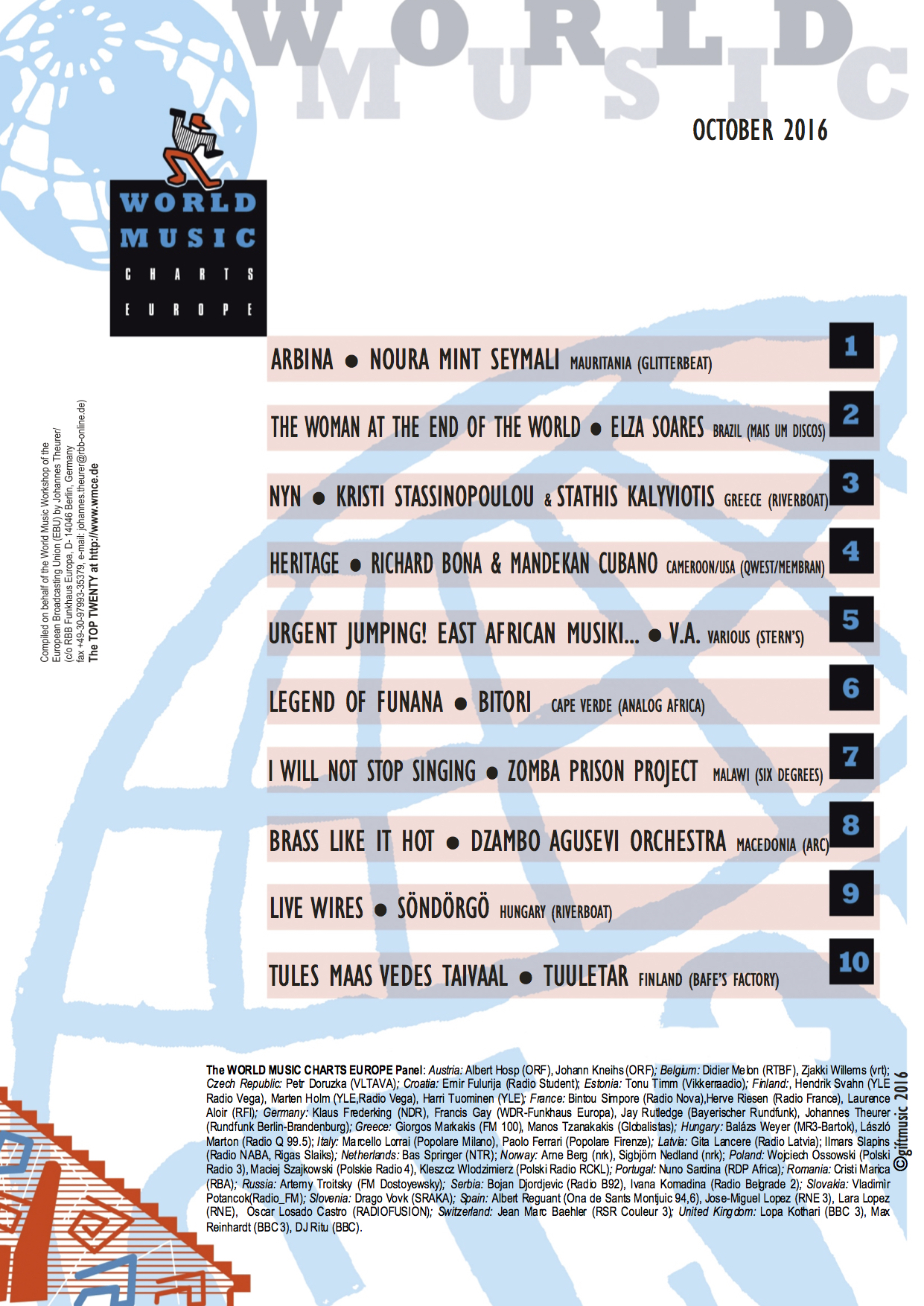 Tuuletar will be representing at WOMEX 2016 in October in Santiago de Compostela, Spain. WOMEX is an international convention and networking platform for the world music industry. Tuuletar has been invited to perform live in a radio show, hosted by NRK together with BBC and KEXP Radio from Seattle. The concert will be on the 20th of October at 16:00 local time with live audience. Concert can be heard from www.womex.com or www.nrk.no

The debut album of Tuuletar, “Tules maas vedes taivaal”, made it to the World Music Charts Europe August 2016 -list #13/20.

Once a month radio-Worldmusic-specialists from 24 European countries select their individual top ten favourites out of current worldmusic releases from their playlists and mail them to Berlin. The nominations are processed in a data-base and the top ten is then published as the WORLD MUSIC CHARTS EUROPE (WMCE). Read more about WMCE: http://wmce.de/

Tuuletar has released their debut album. “Tules Maas Vedes Taivaal” -album was recorded in USA in the beginning of 2016 by Liquid 5th Productions. The album was released the 29th of June 2016 by Bafe’s Factory record label. The official release concert was in Helsinki the same night.

Order your album online from 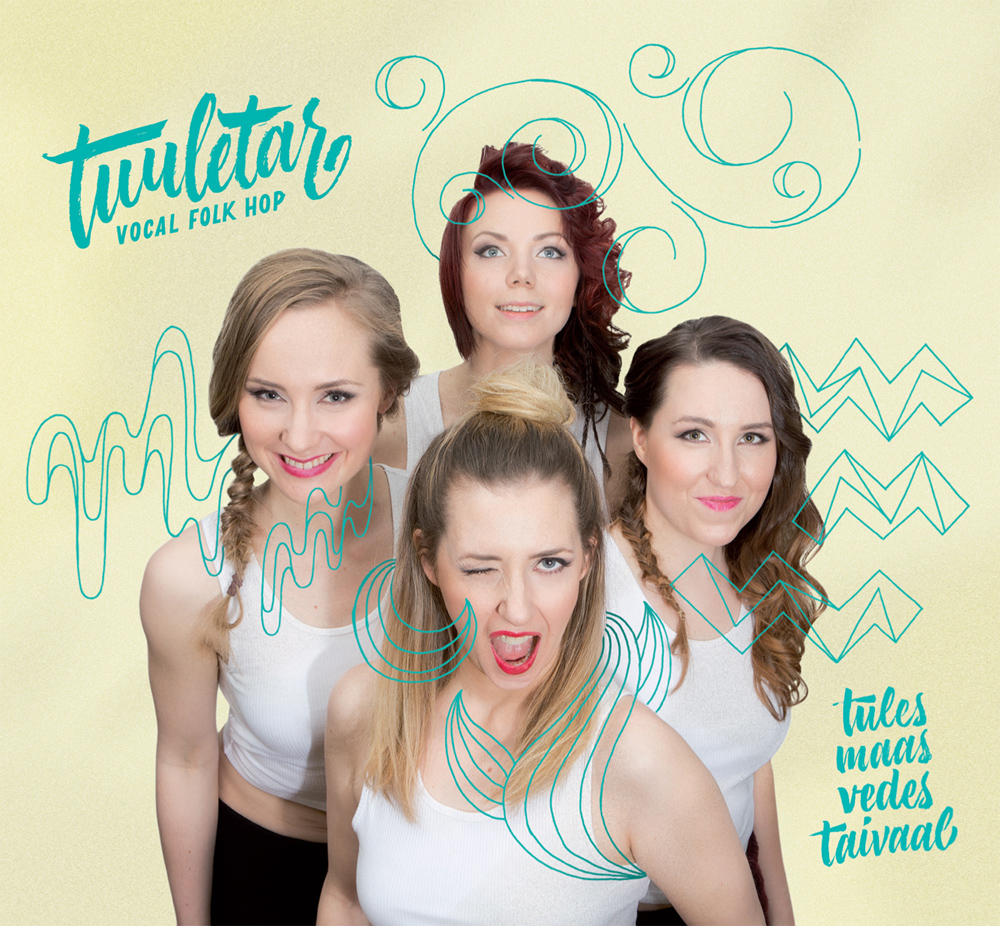 “Among the most promising pop vocal groups in Finland and Scandinavia today—the modern girl-group sound of Tuuletar comes alive on their much anticipated first album Tules, Maas, Vedes, Taivaal. The eight song CD was superbly recorded and produced at Liquid 5th studios based in North Carolina. Visiting and performing in New York on the way back to Finland, Tuuletar can’t wait to bring their “Folk-Hop” sound —a cappella vocals all sung in their native Finnish—to the attention of music fans World Wide.”

“Tuuletar (Goddess of the Wind) really touches your soul. Whether you like this music or not, these four Finnish singers are amazing and have quality. With the same ease they sing solo, create beat-boxing, sing the bass, add effects, clap & stamp and even sing khoömei, the overtone singing as we know from Mongolia (in ‘Tuu Kerää‘). It sounds all so organic that you wonder if it really only voices you listening to. — Tuuletar are four solid singers who understand the art mixing voices to one blended sound, so you don’t hear four voices but one great band!”

Read the whole review from here

(translated in English)
“The sound art by Tuuletar breaths and lives with human voices… The flexible interpretations of their own compositions are fresh and sparkling. The harmonic elements are filled with fragile nuances and depth so Tuuletar deserves their buzz.” 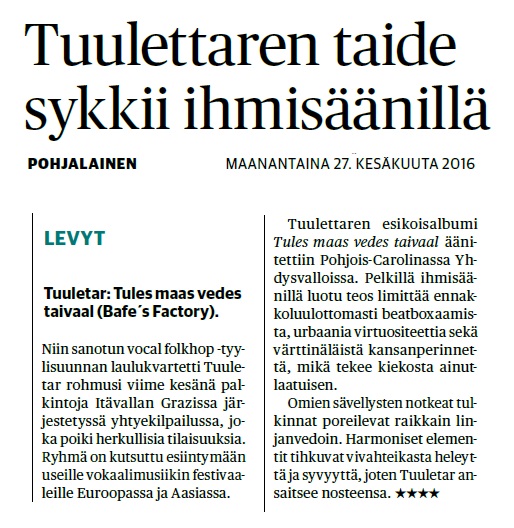 Tuuletar will be releasing their first album on 29th of June, 2016.
The album goes under a title “Tules Maas Vedes Taivaal” (On Fire, on Earth, in Water and Sky), which refers to the four elements and their mutual resonance.

The album can be pre-ordered from Recordshop X or Record Label Bafe’s Factory.

The official album release concert will be the 29th of June at at Club Kuudes Linja in Helsinki. The show starts at 8PM and the warm up act for the evening is a Finnish art pop -duo Sagolik. Tickets for the show can be purchased from the door at Kuudes Linja or from pre-sale via Tiketti.

Tuuletar has invited to perform in Budapest, Hungary in June 2016.
Tuuletar will be performing at International A Cappella Festival the 18th of June at 6PM.

The lineup is brought to you by Hangvető in parthership with Varkert Bazar, as part of the Dunapest contemporary arts festival.”

TUULETAR is releasing their new single “EI LEIJUTA” on 15th of April 2016. The single is a first taste from Tuuletar’s upcoming album, which will be released in June 2016. Tuuletar will be performing live in several venues during the day (see the attached schedule below). The single will be availbale in Spotify and iTunes. This Popup-day is produced by Bafe’s Factory and Saura Booking Agency.

TUULETAR is a Finnish Vocal Folk Hop -group that creates all their music only using human voices.
“EI LEIJUTA” -single and the upcoming album was recorded in USA and is produced by Liquid5th Productions. The album will be released by a Finnish record label Bafe’s Factory.